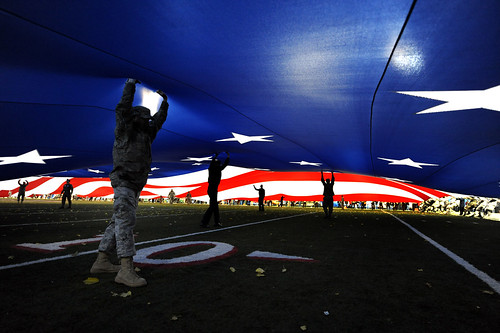 Television sports analyst and former Dallas Morning News columnist Kevin Blackistone is drawing criticism for not paying sufficient deference to the federal occupation of America in calling the “Star-Spangled Banner” a war anthem.

He was on a “Buy or Sell” segment of ESPN’s Around the Horn when criticizing the debut of Northwestern University’s football uniforms that features the American flag.

If you sell this along with me, you should also be selling the rest of the military symbolism embrace of sports. Whether it’s the singing of a war anthem to open every game. Whether it’s going to get a hotdog and being able to sign up for the Army at the same time. Whether it’s the NFL’s embrace of the mythology of the Pat Tillman story. It has been going on in sports since the first national anthem was played in the World Series back in 1917. And it’s time for people to back away.

Even if you don’t think the creeping tide of militarism is a bit much, enthusiasts for the national government should appreciate that these rituals lose there significance as they become commonplace, transforming to aloof rituals.

Except for maybe Marvin Gaye’s rendition.