Although the event was planned before the recent homicide of unarmed teenager Mike Brown by a white Ferguson (Mo.) police officer, his death may have been a national tipping point highlighting the militarization of police and their lack of accountability.

Individuals across this nation have been stripped of due process, subjected to state-sponsored police terrorism, and continue to suffer the fate of being terminated extra-judicially.

In Dallas the police have murdered over 70 unarmed individuals, most of the black and brown men, over the last ten years. Excluding a recent incident where police testimony was contradicted by surveillance footage, there have been no indictments since 1973.

A group of “Black and Brown residents,” as the club’s websites describes, may seem alienating from the larger police accountability and gun rights movements, but it’s important for members of a largely black neighborhood to patrol neighborhoods they live in, deflating the argument that the unaccountable powers of (mostly white) police are needed for maintaining civil order. They are mutualizing the municipal policing service, building counter-power patterned after direct democracy.

In a comparable manner that decentralized police accountability organizations like Cop Block and the Peaceful Streets Projects don’t participate with active law enforcement officers, black-only exclusivity isn’t being anti-white, just recognizing that participation by whites, a group that’s historically distressed blacks, would have a chilling effect in organizing to express their grievances.

This shouldn’t rule out useful coalitions with blended organizations, though not on the terms of whites, but first in a culture of free and open expression needed for a just society. 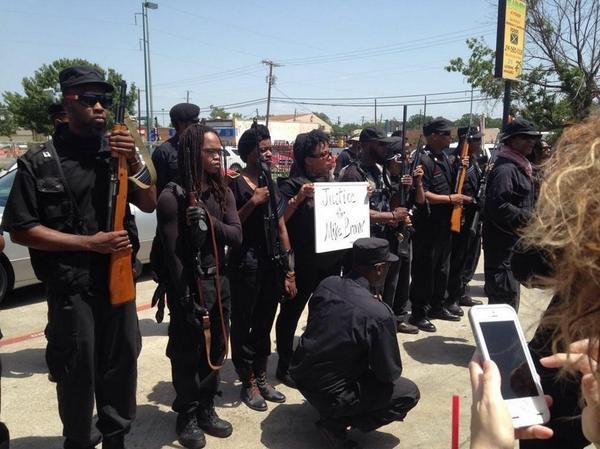