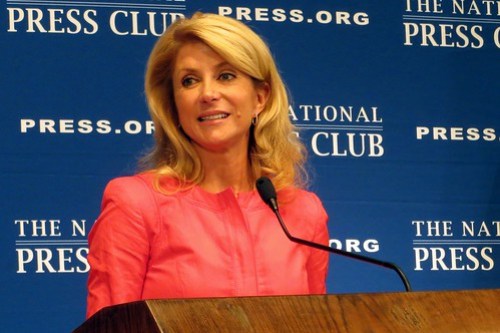 After nearly a year of charting her race to be the next Texas governor, Wendy Davis is finally taking the offensive against the GOP nominee, Attorney General Greg Abbott.

For weeks, Abbott had been plagued with questions of whether he would have signed a bill like one Davis sponsored in the last regular session that would allow women more time to sue an employer for paying male counterparts more for the same work and would allow women to seek redress in a state court. The bill was eventually vetoed by Gov. Rick Perry on the grounds that it was “redundant,” as a more curtailed federal version of the Lilly Ledbetter Fair Pay Act was already law. Abbott finally responded to the question, saying he likewise would have vetoed the bill. That sent the Davis team hurling press releases about the indifference her opponent has for women’s equality, which is arguably true.

In that same session, Davis rose to national prominence for her 11-hour filibuster of a bill, which eventually became law over her objections, meant to cripple women’s health clinics that provided abortions. In spite of that, she disclosed to the Dallas Morning News that she didn’t actually oppose the 20-week ban on abortions; she just wanted the restrictions on doctors and clinics to be more lax.

For these stances, she’s supposed to be a champion of women’s equality. Hardly. She’s an impostor offering superficial remedies.

If Davis were concerned that women weren’t receiving their fair pay, she would confront the biggest burdens on women’s achievement: namely, capricious occupational license requirements, restrictions on reproductive health care, immigration barriers to legal status, constraints on operating home-based businesses and access to credit, prohibitions on effective labor organizing tactics, asset forfeiture, means-tested welfare programs that lock single moms in poverty, a drug war that fractures families and accounts for a greater percentage of women prisoners than it does men, and welfare for the rich that takes the form of artificial scarcities and barriers to competition. Demanding anything less would be selling women short.

Meddling politicians claiming to be the champion of your interests are just promoting their own. They can be expected to side with power and influence, not their ordinary constituents, who are just left worn and scorned.